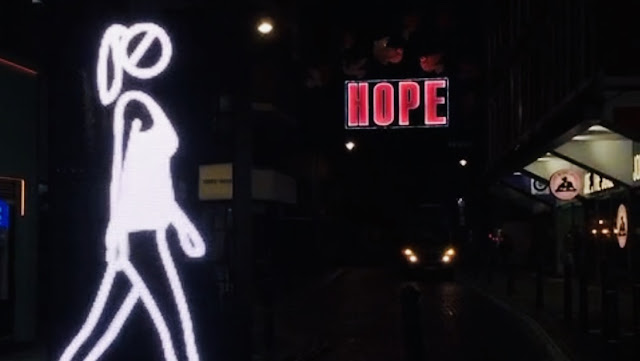 Out last night, a bar in off Brick Lane, a film, a sort of ghost story. A woman character / narrator, a 'homeless' person. Many still images used in the film, some were ones I had done. This was a film by Dave Fox, James's dad. It's called Finney's Ghost. Did I like the film? Did I enjoy it? These questions resound around after the showing. I don't know. I've seen the film manifest itself over the years, and seen various versions of it on a computer screen. It was good to watch it in this cavernous space on a big white wall.

Odd words floating around this morning as I drink coffee and ponder the page. The blank page like a flat pond, no wind, no movement, just reflection, words begin to appear, water ripples. Everything fluid, nothing fixed, things happen. I remind my self that appearance is nearly everything else, reality is here and now. I breath, hum, notice an inner voice, not just what it tries to say but how it tries to say.

A message just came through from a Cliff, he fancies coffee this morning, not sure when or where.

My thoughts, disparate.
An image comes to mind, a huge wooden surface, like a table top, I'm spreading all my stuff out, it seems to spread out for as far as my eye can see, an horizon, and there the light of the sun, a sharp line, and over there, a burning mirror, the moon. A film.
. Monday, November 11, 2019